The Garden city of India,one of the most fascinating and colourful city of India..once famous for its vicinity and calmness is now a choice of millions perhaps for its status as Silicon Valley of India. The growing metropolis speaks its story on its own and is rapidly attracting the educated youth as well as the working class. As for now its known to the world for its IT and Infrastructure but there's still a Old Bangalore alive in its streets and Pubs. Be it Ginger tea or the snacks of Udupi's(Veg Restaurants) you can smell the liveliness of Bangalore from it. It can be defined as one of the most demographically diversified city.The night life in Bangalore is much more brighter than the days..believe it or not. Though now government has imposed time restriction but still you find most of the city pubs open till 11:00 pm. One can chill out at brigade road or MG road for experiencing the pubbing culture of the city. You can have a extraordinary shopping experience at these places with the vibrant and cosmo Bangalore crowd. Garuda mall a famous mall near brigade road is one such shopping hub with many time killing options. Other such places of shopping inerests are the Forum Mall and Sigma mall in the other part of the city.  The most common source of traveling in the city are autos and BMTC buses. 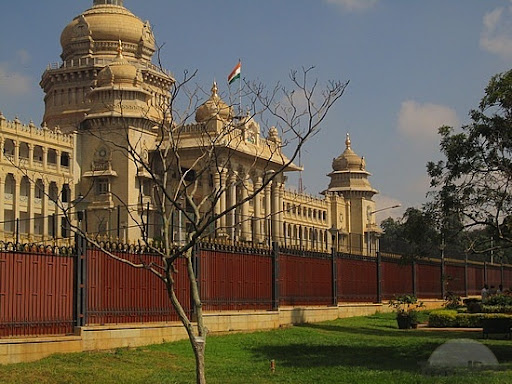 Starting from The Assembly building of  Bangalore(Bangaluru) also known as Vidhan Soudha, One of the most beautiful assembly complexes  in Asia. During night the complex has its own charm and is illuminated during public holidays. Though we can not enter the premises but still can view it from outside. Someone having interests in Old buildings should have a sight of it. 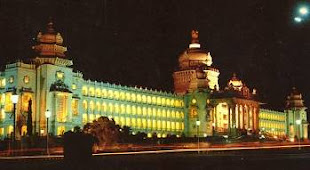 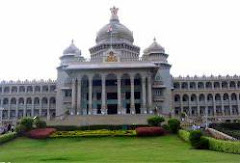 Out of the other famous ancient buildings is the Bangalore Palace also known as the Guttahalli palace which belonged to the Wodeyars of Mysore. There are regular BMTC buses to this palace. 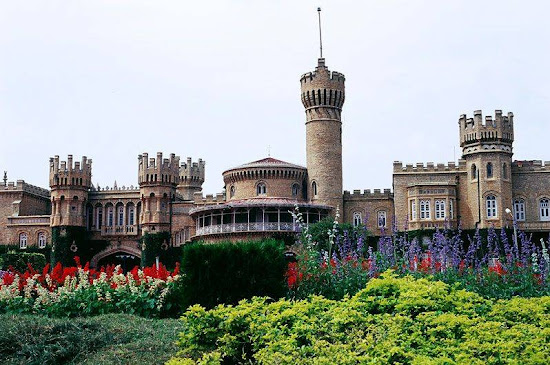 Below is the view of palace from the front. 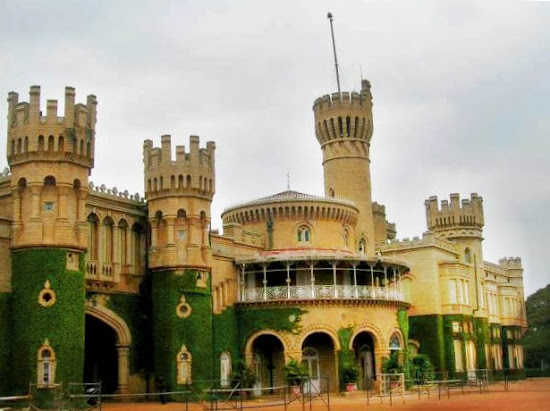 There are not only ancient buildings here but city has many small water bodies also. Amongst thm is the beautiful and old Ulsoor lake in the eastern part of the city.The largest Sikh shrine in Bangalore, the Sri Guru Singh Sabha, is situated on the banks of the Ulsoor Lake. 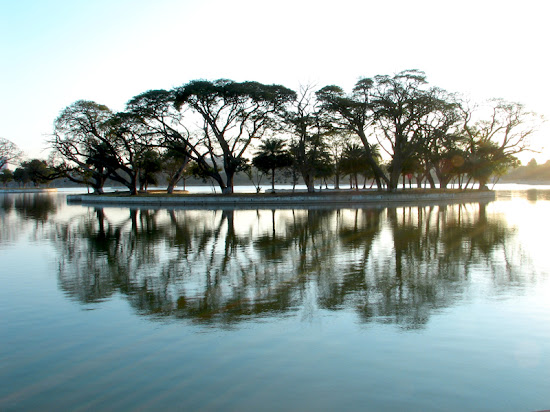 Evenings can be great at Ulsoor with the cooling sun... 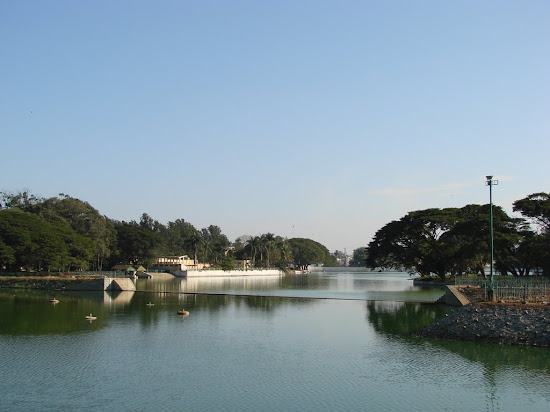 The Lalbah or the the Red Garden is a botanical garden situated in the heart of the city with a variety of trees and flowers. This is a 240 acre garden built by Hyder Ali father of famous Tipu Sultan. It's also known for its ancient rock formation believed to be one of the oldest rock on earth. Below is the part of that rock. 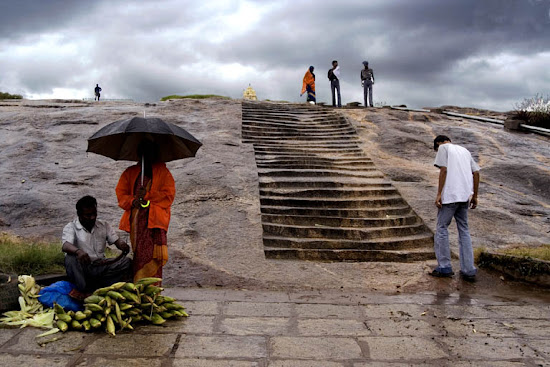 There's an annual fair of flowers here showcasing rare species of flower from round the globe. 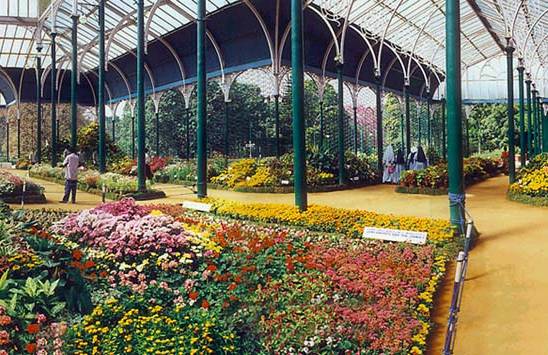 There's a glass house inside build on the likes of London Crystal Palace yet an attractive spot.. 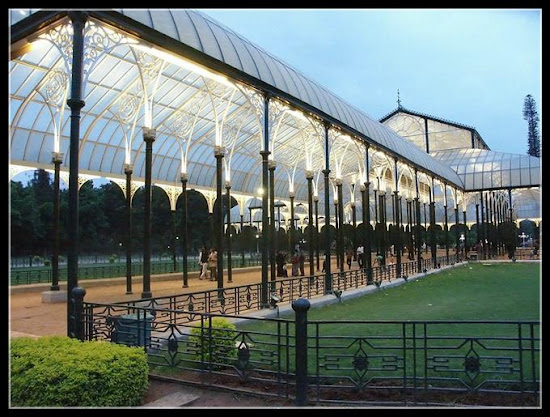 For the devotees of Krishna(Vishnu's Avatar) there a well famous place....the Isckon temple towards Yelankah.  This another magnicient structure in the city and attracts many Indian as well as Foreign devotees. The entrance of the temple is magnificent and spending some time here is worth of it. 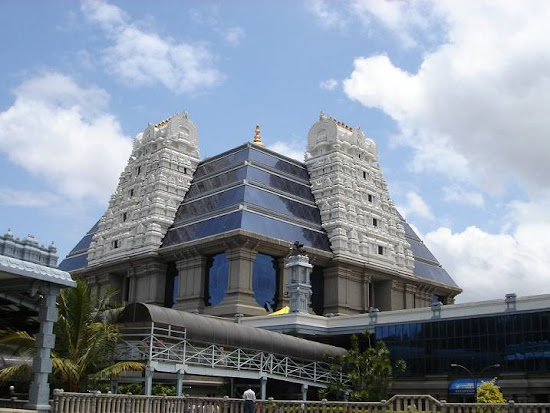 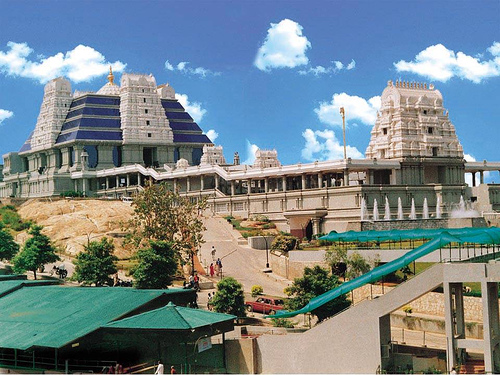 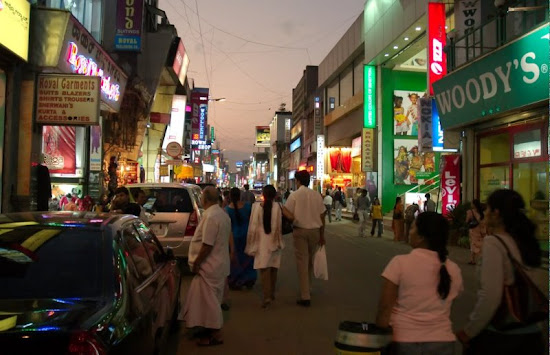 Above and below is the famous Commercial Street placed between Shivaji Nagar and Kamaraj Road famous for its Garments and textile shops full o energetic crowd. Full street is lit by lights and the environment is like Diwali.. 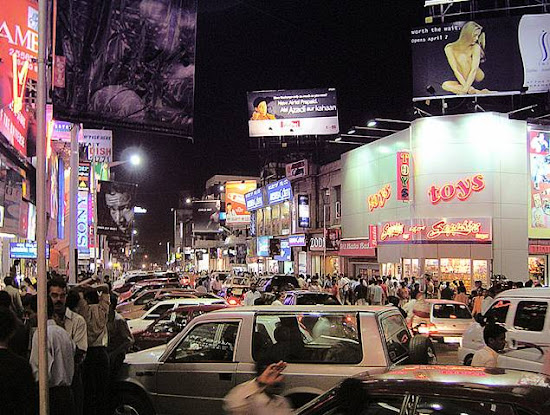 The famous brigade road the main shopping lane in central Bangalore can be said the Mall road of the city. You will get all good brands here and is really suggested for spending off your green paper at will. 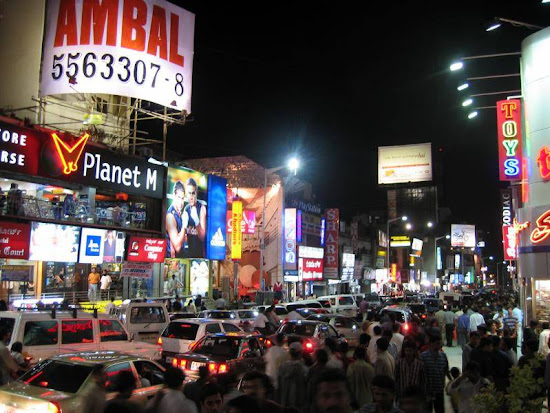 Below is a deserted Brigade Road not very often seen. 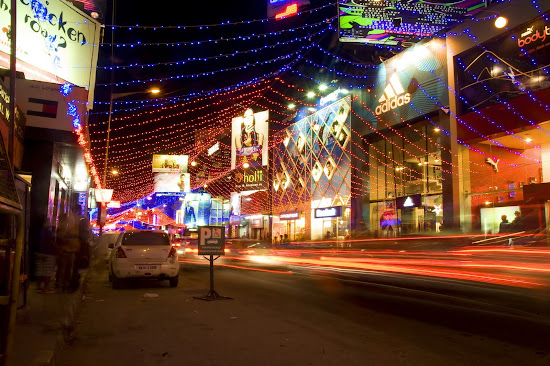 MG Road famous for its pub. The yet to complete Bangalore metro will have a dedicated station here and you can see the construction work going on there. Its also one of the busiest road of the city with many retail stores and old restaurants.  Starting from the trinity circle runs towards the Anil Kumble circle. 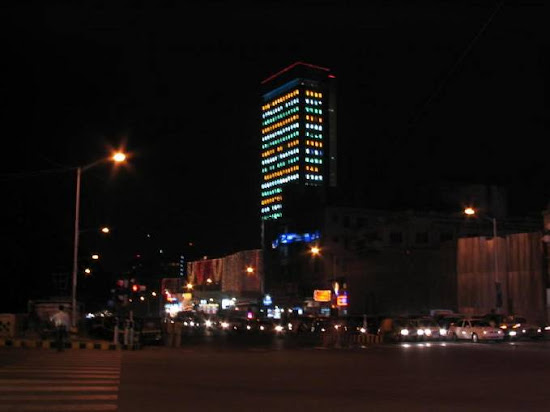 Traffic can be a real mess here, better take a walk rather than having a drive through.. 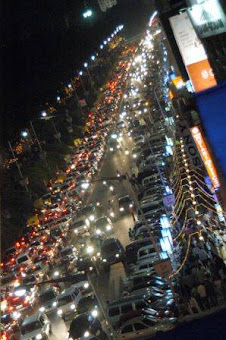 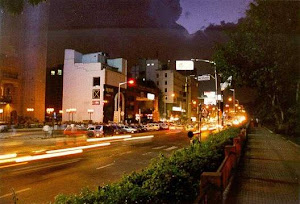 The Garuda mall one of the biggest mall in the city 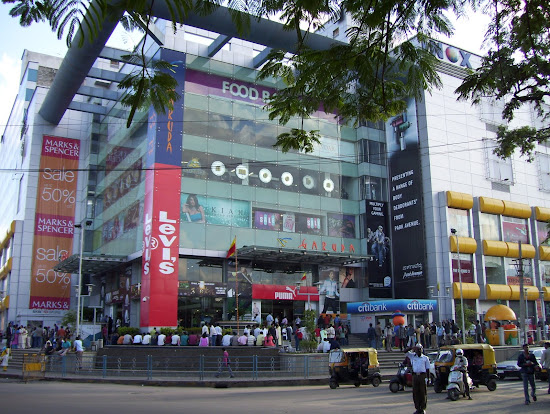 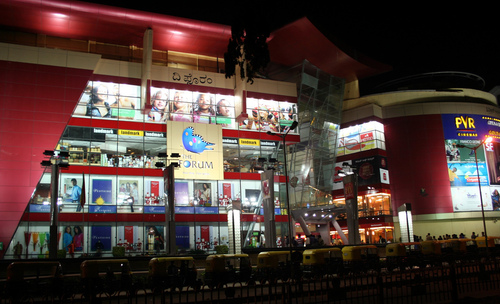 Trinity circle at one end of the MG road have some good architects and one of the busiest circles. 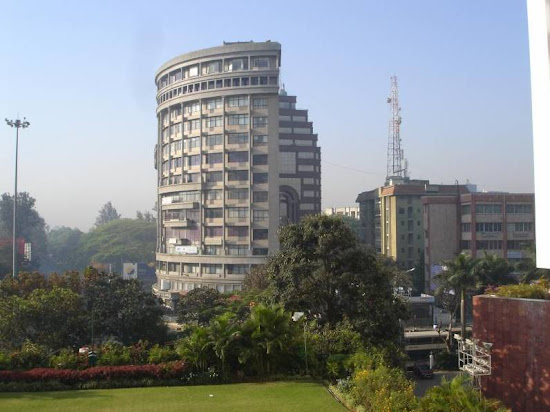 The City can be as crazy as this... 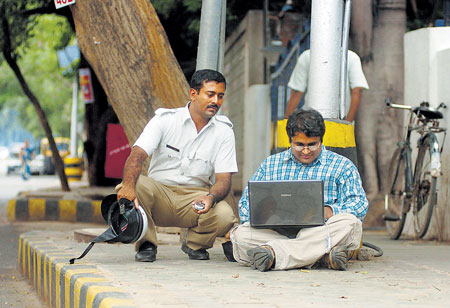 A view of Diwali night in the city... 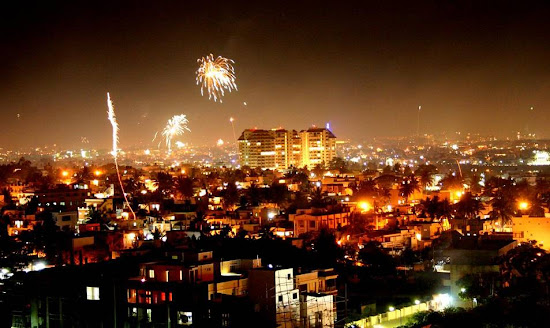 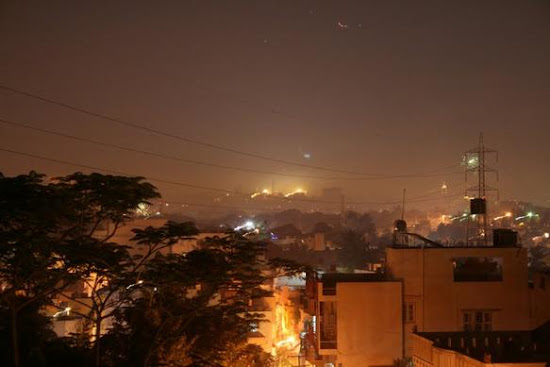 The famous Chinnaswamy stadium which hosted 87, 96 and the recent 2011 world cup matches of Cricket and also the IPL matches. 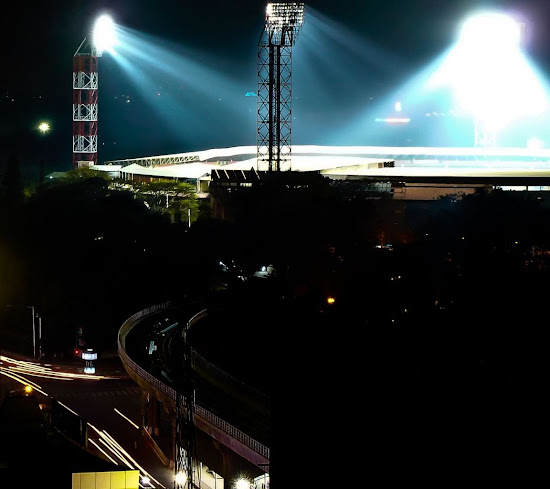 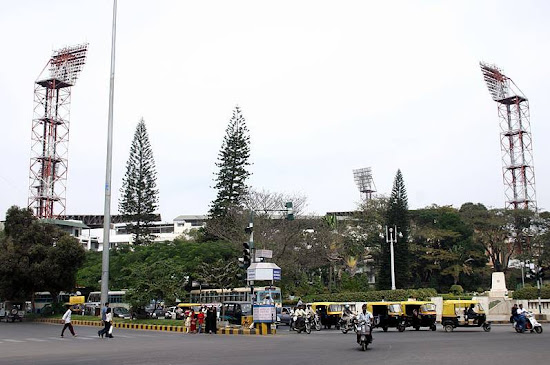 Though the weather of here is always pleasant  and cool but  still the best season to be in Bagalore is July to March.It is a metropolis and well connected by Air,Road as well as Rail. There are direct International flights from here to most of the important cities of the world.
at August 15, 2011
Email ThisBlogThis!Share to TwitterShare to FacebookShare to Pinterest
Labels: Bangalore, Garden City

Sometimes you feel like a drop in the ocean!! Or an ocean in the drop??🤔 Interestingly the structure here is a masjid made of mud ...

indianexplorer
Pune, Maharashtra, India
I am not Bear Grills or Edmund Hillary...But I am inspired by them...